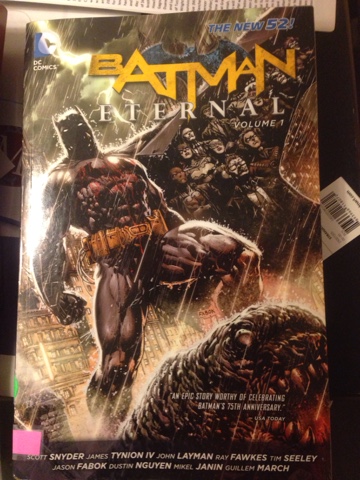 Finished reading Batman Eternal vol 1 from the library.
It's pretty hectic with a ton of characters. For heroes, it has Red Robin, Red Hood, Batgirl, Batwoman, Batwing, Jim Corrigan, Batman of Japan and Argentina (no Nightwing or Robin). For villians, it has Penguin, Falcone, Professor Pyg, Cluemaster, Jokers Daughter, Hush. Sort of appearance by Joker. Also in more neutral/helpful roles, Killer Croc, Catwoman, Scarecrow, Alfred's daughter. And so many more.
Jim Gordon is arrested, city erupts with gang war, corrupt cops, nanobots, dark magic and severed limbs, dollotrons, killer whale, zombie/monsters, evil spirits.
And it's just getting started.
I don't love the changes in art style or story arcs, but I'm still looking forward to vol 2.
Posted by B at 8/05/2015 09:52:00 PM 0 comments

Using Hibernate 4.2 and MySQL in a project with an in-clause query such as:
select t from Thing t where t.id in (?)

Hibernate caches these parsed HQL queries.
Specifically the Hibernate SessionFactoryImpl has QueryPlanCache with queryPlanCache and parameterMetadataCache.
But this proved to be a problem when the number of parameters for the in-clause is large and varies.


These caches grow for every distinct query.
So this query with 6000 parameters is not the same as 6001.

The in-clause query is expanded to the number of parameters in the collection.
Metadata is included in the query plan for each parameter in the query,
including a generated name like x10_, x11_ , etc.

Imagine 4000 different variations in the number of in-clause parameter counts, each of these with an average of 4000 parameters.
The query metadata for each parameter quickly adds up in memory, filling up the heap, since it can't be garbage collected.

This continues until all different variations in the query parameter count is cached or the JVM runs out of heap memory and starts throwing java.lang.OutOfMemoryError: Java heap space.

Avoiding in-clauses is an option, as well as using a fixed collection size for the parameter (or at least a smaller size).

For configuring the query plan cache max size, see the property 'hibernate.query.plan_cache_max_size', defaulting to 2048 (easily too large for queries with many parameters)