I'm hooked on the Injustice: Gods Among Us game for IPhone.
I know I look like a madman playing it, furiously tapping the screen, as I was earlier at a craft fair.
It's free to play, a pretty simple matchup fighting game.
Starts off as 3 vs 3 for various DC comics characters.
I have Green Lantern, Sinestro, Nightwing, Catwoman, and Cyborg so far.
At levels between 10 and 13.
And only about 30k credits so far.
I'd like to have Batman and Superman, but I don't feel like dropping the $20-50 to have enough credits for them.
If I played long enough, I should build up enough credits, but that sounds like a while.
Looks like the game is really popular right now, and is making some good money on the style of pay system.
Can't argue that it's fun and well done, nice graphics and released on a variety of platforms (except Android).
I never imagined I'd be gaming so much on my phone, but that changed with SpaceTeam and now this. 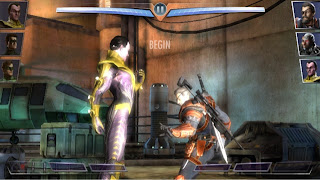 UPDATE 4/23:
So my continued playing finally paid off with about the best outcome I could have hoped.
I've been playing a few of the same rounds over, building up my credits and experience.
Then I finally went back and finished the first bonus round.
I'd skipped it once I saw the health on Grundy was too much for me (when teamed up with two other chars).
But I came back and won, getting a bunch of credits (7K) in the process.
It also gave me a new card, the Flash.
I played a few rounds, building up experience for Flash and the remaining credits I needed.
Then I had enough to get the daily discounted Gold booster pack for 75K.
Which gave me one of my top Gold picks of Batman! 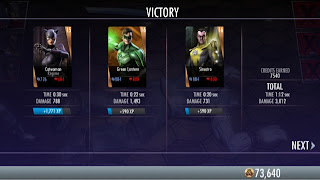 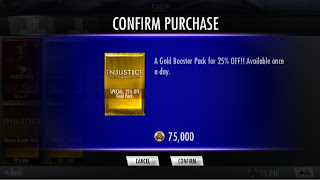 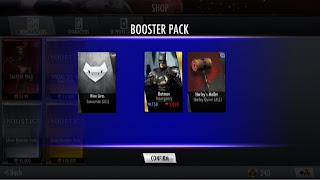 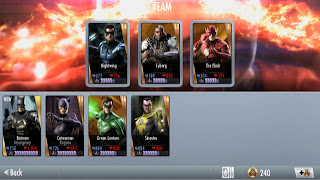 UPDATE 4/29:
Picked up my second 25% off (75k) Gold pack today, got Wonder Woman. Not my top pick (I agree her model looks weird). But still a Justice Leaguer, and she can help me advance through the 2nd level. Would be good if I ended up getting Superman as a third. Now to level her up first, which should go fast. Batman is on level 19 now.
NOTE: I had to restart the app to have the discounted Gold pack option reappear.

Highs and Lows of being a Developer

As happens at any job, things change and quite unexpectedly at times.

For most of the last year I've enjoyed working with a great group of developers on a project I enjoy.
It was the best I could ask for.
A complete rewrite of an aged and troubled application. It was a frankenstein mix of technologies and libraries from partial rewrites over the years, being handed down among devs.
Finally, it was being given the time needed to move in the right direction. To cut out the sections of code that were unused or little understood or simply caused problems.
To dig inside it and understand it all, to be able to rewrite almost every line of code.
In the process, fixing tons of bugs just by doing things right.
Sure there were hacks needed here and there, but at least it was maintainable and consistent. It was a foundation for the future, using new technologies.
And we had worked through almost every issue (some were grueling) to finally get within a month of our release.
It felt good, it was fun, it was exciting.

But then about a month ago, the edict comes down from high in the chain.
The current work is on hold indefinitely, the team is moving to a different department, and we are losing team members who are staying behind.
This was the result of merging two teams who were working on the same website but managed separately for the last year (and hoping to align goals/schedules and avoid wasted work).
It hurt. I understand the goal and it may be the right decision, but that was hard, really hard.
And at the time I didn't understand it technically (I may not still either).
It has taken me a while to cope with the loss, I probably still am.
But it's how the pieces had to fall, with politics and all.
Decisions are easy to make from that high level, ignoring the details.
In this case, that's the only way to correct a mistake from the start.
The teams never should have been separate, so one of them had to move.
Really it all comes down to marketing and the power involved. That can give a new project with potential possibilities more power than an existing in-heavy-use aged system (even if the existing system was about to be reconstructed as a new foundation for everything, which doesn't matter, that's too technical).

So quite a fall.
From being so close to releasing a proud achievement. No, it was no perfect and it would have been months of bug fixes, but I would have been happy to work on those. And happy to work on any new features to follow.
To now being in a limbo state, a code purgatory at the moment. Unsure what is to come.
For now, back working on the legacy system, fixing defects that were already fixed in the newer code.
And trying not to think of the dream that drifted away. Letting go.
Posted by B at 4/18/2013 09:53:00 PM 0 comments

Finished reading Revan (Star Wars: The Old Republic)
This is mostly about Revan post-Sith, trying to remember after having his memory wiped by the Jedi, and trying to understand his visions for impending danger hiding out on another world.
Started slow but once it got going, I flew through it in a few days.
It's mostly two parallel stories, Jedi Revan and Sith Lord Scourge and their eventually meeting and story merging relating to the Sith Emperor.
I didn't know where it was going to end, so I was surprised.
Glad to know some of this story continues into the SWTOR game.

I also picked up the Old Republic comics related to the SWTOR game.
First one look okay, but art in second comic looks horrible. Can't stand to look at the faces, they all look the same.

and finishing Knights of Old Republic.
I really liked the Zayne story, but not so much the Jarael second half.
But the ending was great, as it should have.
Posted by B at 4/15/2013 10:41:00 PM 0 comments

Until recently when it stopped working.
The menu options were empty for those shows.
Thats the problem with web scraping code, it can break whenever the website changes.
I was at a loss util I stumbled upon this forum, which is just awesome.
There was a fix posted within the last 2 days.

It included a pastebin with replacement python code for cbs.py.
I reviewed it a bit (here's a good motivator to learning python better).
I gave it a try, replacing my file in appdata/XBMC/addons/plugin.video.free.cable/resources/lib,
and it worked!
I can see the episodes list again and watch shows.
So much better than trying to view them on the CBS site.
I'm not sure exactly why but it's better quality, plays smoother, and no commercials. Pretty amazing.

But even Hulu was having problems today.
Twice while I was trying to watch a show on Hulu, I was bumped to its 404 page. Random.
Oh the woes of internets tv. first world problems.

UPDATE 4/18:
Another fix to replace the cbs.py with another pastebin from same forum, and back to working again.