So after finishing a couple more Knights of the old Republic comics from the library,

I saw an ad for the free-to-play Star Wars Old Republic game.
It's been out for a while but recently became a free play model. The Bioware story is interesting.

So I downloaded it. Well just the installer at first.
And then I waited and waited and waited for all the content to download (took over a day, almost 20 Gigs averaging around 500K/s).
Annoying that its not on Steam since most of my games are.

First thing to notice is the awesome content integrated into the game including the movies and music, especially the intro clip for each character type. That made me feel a little better about the long download time.

First I started out my character as a Sith bounty hunter. I started a mission but in the middle of combat it had an error and crashed (must have been a fluke since it hasn't happened since).

So I decided to start fresh. I wasn't really digging the bounty hunter anyway. I couldn't feel the purpose for the missions.
So for the second character I went with a Jedi Knight. And after flipping through a bunch, picked out a random name. After another cool intro movie, I was on Tython, fighting against flesh raiders, traveling to the Jedi temple, and especially trying to get myself a damn real lightsaber.

For controls, I wasn't really enjoying them at first, felt a bit like Second Life except with story/movies and character progress and a purpose. I don't see a way to change the key bindings and there is no strafing (but I can recreate it with moving left/right and holding the mouse button for the camera angle).

Another weirdness was that the characters are tied to a server. Took me a few tries of logging in and not finding my characters (being prompted to create a new one) before it hit me.

UPDATE (4/3):
Finally made it to level 10 and built my lightsaber, then traveled off world to Coruscant.
This level was the first time i saw reasons for subscribing, to level up faster and have more freedom to travel. I'm sure there are other reasons as well.
I've really enjoyed the game so far using just the free play and i think it would be worth paying for. There's a lot of effort and details put into the game.
I've commented about the videos before, but also the story and character building/skills and environment deserve praise. It really feels big especially now that i'm moving between planets.
It's definitely been successful consuming a ton of my time lately. I'm hooked.

Still really digging my Star wars comic reading from the library.
continuing the Legacy and Knights of the old Republic issues. 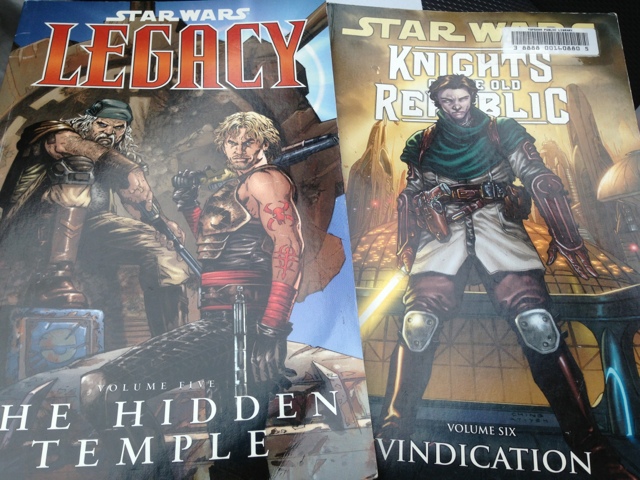