This was my big X-mas gift to myself this year: Chromecast. 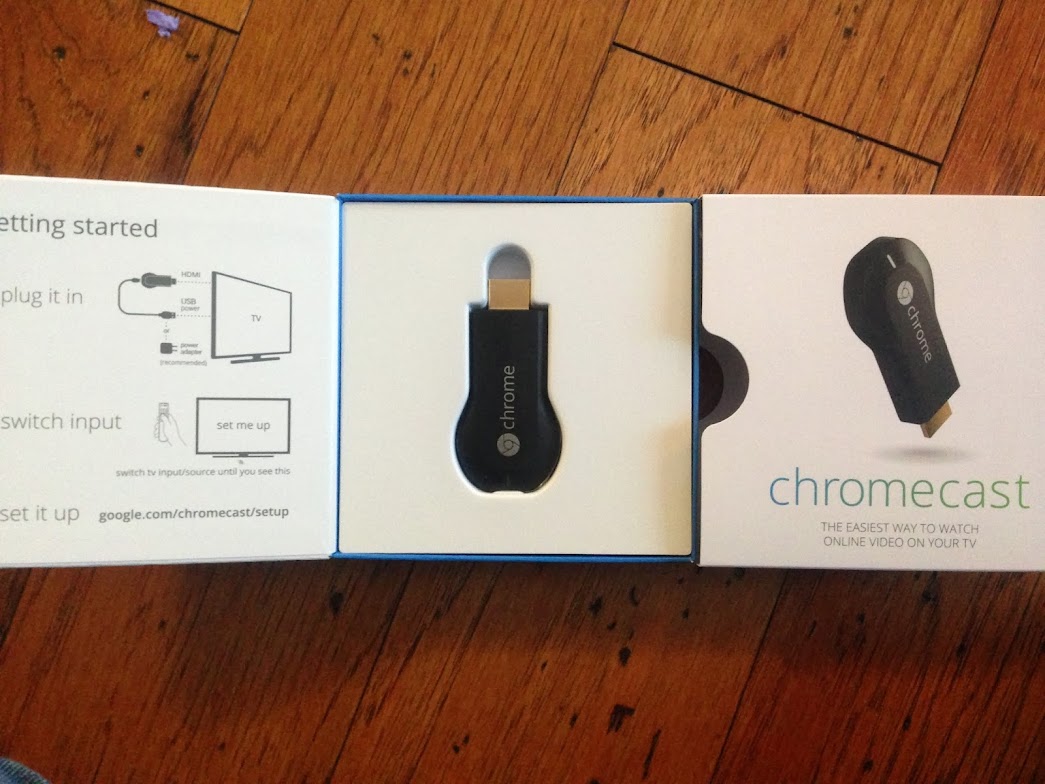 I received it in the mail just two days before the holiday, after debating whether to get it.
In the end, I did because I had to pickup something else and Amazon had $5 off on it.

Now I'm not expecting a ton from Chromecast.
My main goal was having something easy and cheap for watching tv/movies without needing to hookup the laptop like I do now.
Yes, there are other options but at $35 (or $30 here), how could I not try it?
My minimal expectation was to be able to play Netflix on it using the iPhone app.

After that I was able to verify it was working from the laptop chrome browser, casting a tab. This worked but it was laggy (tested Hulu non-plus). Now I didn't really expect this to be perfect, I know the Hulu plus app is ideal, but this proved it was setup and working.
(This was better after I turned the quality down to Standard in chrome cast Options, and this is on a laptop with i7 core and 16gb ram)

Next I installed the Netflix and Youtube apps on my iPhone. Of course I had to dump pics/video to free up space, and then dig up my Netflix login from KeePass.
The Netflix app worked as expected, easy TV icon to select playing on Chromecast and quality was great. (I did have the audio seem out of sync a couple times for Netflix, I paused it and then it resumed fine)
Youtube app worked similar, same TV icon to chose destination for playing, works just as easily.
Also tested the Netflix app across two different iPhones. Works for any connected on the same wifi local network.

My main comparison for the iPhone app control is the XBMC app, since both allow controlling TV content over the network. But of course XBMC allows almost any content both local and streaming (like with FreeCable plugin), but it also requires running the PC with XBMC connected to TV.

Content is really the main issue I have with Chromecast right now.
It works great with the apps (Netflix,Youtube), but there needs to be more. I've watched a ton on Netflix but content flows on and off the streaming availability (I don't get DVDs anymore). I have a few things in the Netflix queue, but more often I'm playing TV shows on Hulu or other places (on PC).

I've had Hulu Plus in the past (as a holiday gift for a few months) and it was great. I'm sure I'll get back on it at some point soon, and this would be my sweet spot for Chromecast. When TV shows are airing over normal seasons, I'm overloading my Hulu queue. Also there is Hulu Plus exclusive content like new Dr Who and other recently aired but not released shows.
But for anything not on Hulu (like CBS), I assume I'd need a specific app for that site that also supports Chromecast, which is a stretch. (if only CBS and Hulu would work together for more current airing shows - Big Bang, Elementary, Mentalist, etc).

But despite these issues, Chromecast wins for price and ease of use.
It's way cheaper than building/buying another machine dedicated to playing shows. I already have a Netflix account, iPhone, and TV with HDMI, so it was a natural fit.
Hopefully the current limitations disappear over time with an official Chromecast SDK release and future apps. But even if they don't, at least I didn't have to invest much into it.
Posted by B at 12/25/2013 10:03:00 PM